Update: Life from the Trenches

I am well underway in my thesis. For those of you who are able and or willing, I am presenting my proposal next thursday morning at 11.45a at PNCA in Rm 128. I know most of you will not be able to make it but such is life. Its probably better this way, I'll be less nervous giving a presentation to strangers.

This is the final piece I'm working on this semester in progress.

Step 1: Cut a hole in the box. (Sorry, I had to) The fiber panels were all needled together and then needled to the silk organza. 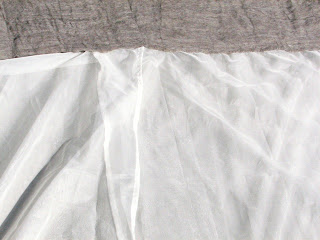 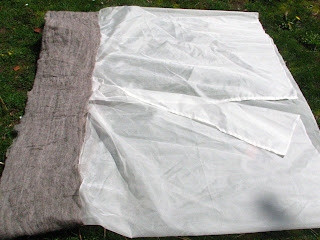 This is the underside of the organza with wool pulled through. Major close up. 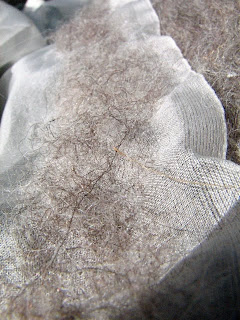 Hanging on a tree, this was simply to demonstrate that the wool and silk are adhered and it is a three-dimensional object -- not just flat. 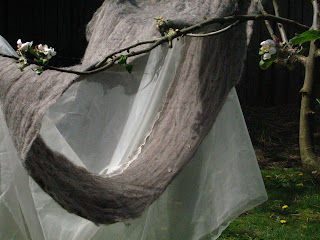 And this is with all three sides converged to make a triangular structure. I'm the lovely ostrich underneath. 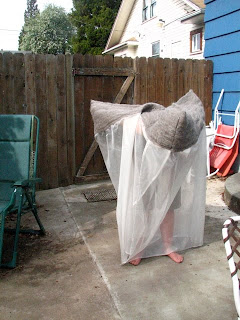 It will soon have connector ropes to be able to connect it to tree limbs so that it holds its form. At that point it will be ready to be hung and sat under.

At any rate, I'm busier than I'd like to admit but it feels manageable. Today I worked with Plant Joy again (that's who I was working with when I found the newt) and it went really quick in spite of compacted soil. Tomorrow I'm giving my second practice run proposal presentation. I've doubled my hours at work in the library. I have two papers to write by semester's end. And on top of all that I'm sick. I've been more sick this year than the last five years of my life combined. Maybe my immune system never recovered from Swine Flu? Who knows. Perhaps just stress? I eat really well (tonight Joel cooked a chicken and vegetables -- delicious!), exercise daily (to and from school by bike + gardening/farming/landscaping) and drink lots of fluid (lots of water and probiotic-rich kombucha). What's wrong with the picture?

Speaking of farming, on saturday Joel and I helped at a farm day at New Era Farm in Canby, OR -- about a twenty minute drive south of Portland -- with a friend who is part of the farm co-op. We just came out to help work, to learn and get experience. Its a fruit/vegetable farm that also has three meat cows and several chickens that are still only about a month and a half old. The farm is nestled in the foothills above the Willamette Valley along the river of the same name. It was so green and bright the whole way there. I wish I had thought to bring my camera, but it seemed a little inappropriate at the time. Next time. We fertilized and mulched part of the orchard (apples, pears, kiwis and grapes) and the berries (boysenberries, blueberries, strawberries and currants). It was nice consistent work, not too hard, not too easy. We did a lot of pushing/pulling the wheelbarrows back and forth from the chicken poop (fertilizer) and the mulch piles to the orchard. Everyone was really nice and we had a really positive experience. If Joel and I stay through next summer we may join the fruit/vegetable co-op. We'll see.

The way that CSAs (Community Supported Agriculture) differs from co-ops is, to put it bluntly, a CSA is capitalist and co-ops are communist. A CSA can function in many ways but the most common I've seen is this: the consumer buys a share of the crop and gets a vegetable/fruit/meat/whatever box each week or every other week. This is a large up-front cost and this is a nice insurance for the farmer. A co-op, as I saw it played out the other day, is a small up-front cost. But this involves the consumer more because it asks that they are involved with helping on the farm at a regular interval. In this case it was to work at the farm five times throughout the season which equals approximately once a month. I like this model better because the up-front cost isn't really for the vegetables but for the seeds and tools. At this particular farm the upfront cost was $100, compare this to how much the vegetables would cost throughout the season per pound -- that's a deal!

The meat co-op is a similar method but with no money changing hands. Since there is much less to do with the actual growing of the cattle, the work is all at the end. You must be willing to help with the slaughtering, butchering and wrapping and then you are able to take a portion home. Its a really great way to get the community more educated about farming and to be involved and interact with the farmers and where their food comes from. I love this because everyone benefits. It certainly isn't something where you can work as a full-time farmer straight away but its a nice way to learn together with a community and have people help start your farm with you. Starting a farm initially is always a big investment.

Joel and I are looking forward to having a farm someday and employing the co-op theory. It seems the most holistic and communal where learning can happen in abundance. To me, farming is the most satisfying work that a body can do. In the sun or rain, it doesn't matter, I always feel satisfied when I am done.
Posted by Hannah Stitzlein at 10:30 PM 2 comments:

So momentous was my last blog with all the hubbub about Rough Skinned Newts that I thought no one would mind if I waited a while for the next blog. Okay, that's not entirely true, the truth is that I've been insanely busy with school, work (I just doubled my hours!), making wedding invitations, and volunteering. Which I have been doing a large amount of as of late.

But in the meantime I've made time for real life. Like pancakes. Whole wheat flax seed pancakes. 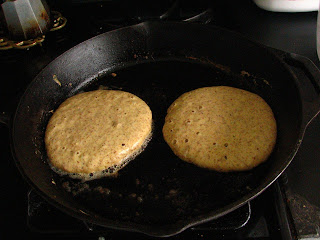 And birthdays! Clara had her birthday on April Fools Day and we celebrated in style. She got this totally cute felted sweater from her mother. 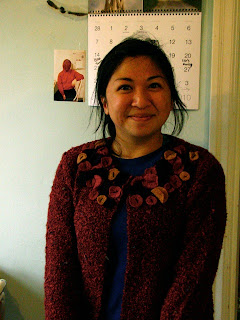 And flowers from a friend in Baltimore. 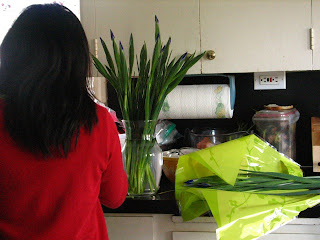 Joel made her a cake that was ever so delicious. 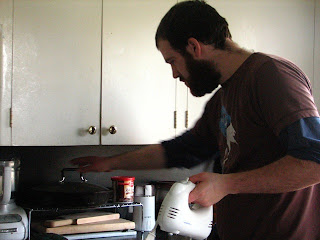 And we all made our own mini pizzas, mine was wonderful and it seemed everyone else made delicious pizzas too. I put artichoke hearts, basil, king royal mushrooms, goat cheese and mozzarella on mine. 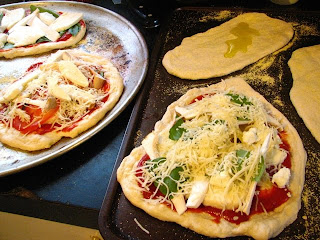 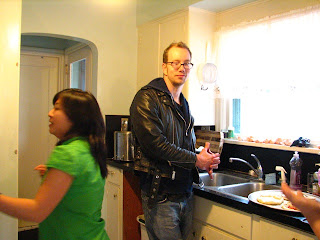 And I took some of the best pictures of my friends, thus far. Or at least, I think so. 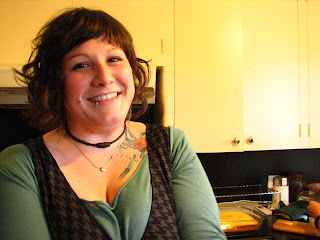 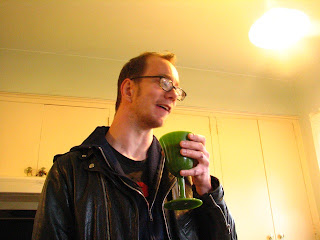 And the birthday girl! 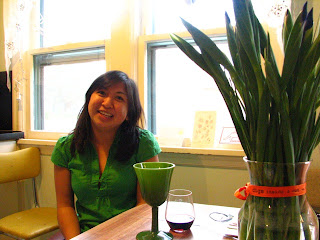 A less-than-flattering-but-appropriate picture of our other roommate Glenn. 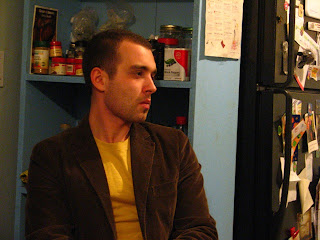 And an adorable-but-not-quite-the-best-picture of Joel. 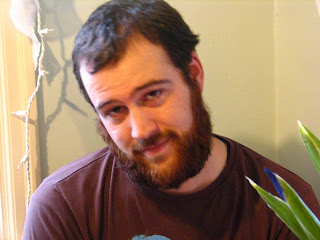 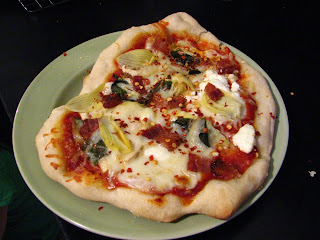 We then went out to drinks at a fancy bar down the street that had the *coolest* fish tanks I've ever seen that were not in an aquarium. I have some phone photos but those are never really that great and I'm also not sure I have the right usb cable... But at any rate, they had black clown fish and anemones, shrimp, pipe fish, fish that moved rocks from out of their lairs, and many that I don't quite know how to describe.

And speaking of animals, my beloved cat caught a squirrel that he's been lusting after for quite some time now. 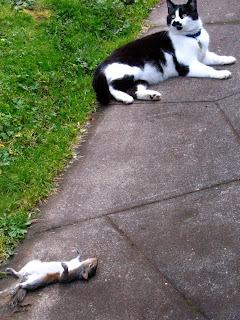 I wish that it had been the invasive red squirrel instead of the native (and dwindling in population) grey squirrel. 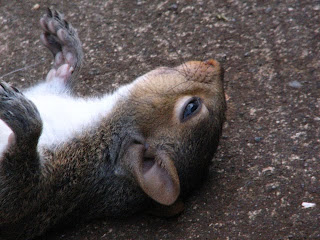 But he did it and thats what counts. I'm so proud of him! 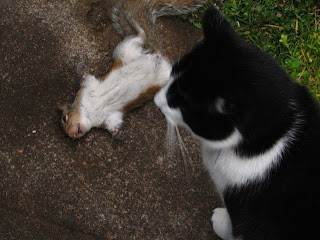 Last night a bunch of us (including Joel's friend from college and his girlfriend) went out for Ethiopian food which was delicious and a lot of fun. It was the busiest I've ever seen that place which is really great because they do a good job and the family that owns the place is really friendly. Clara and Aja. 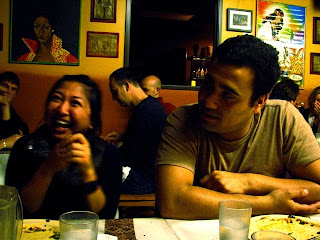 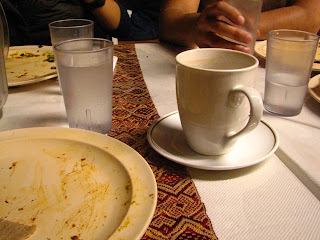 And I started over on my thesis and I'm building it from scratch. This is back to fibers and intuitive creative processes. I've started making felted panels which will become the "roof" structure of a hanging tent. Today I made three panels. 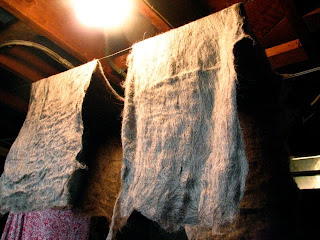 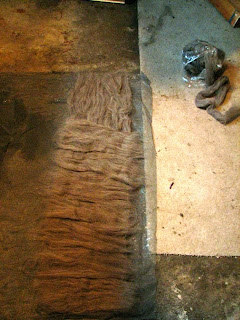 Today I got ahold of the professor I want to mentor me on my thesis and I think he is going to be my mentor. I'm still a little confused how this whole thing works but its starting to feel right. Hurray!

Also today I helped set up a booth at the Portland Bike Show so that I could get free admission to the Night Bike Ride in July. And I'm hoping to get some sweet photos from that, apparently everyone decks out their bikes in glow-in-the-dark things and lights and other things that light up. And I met a deaf lady, named Pinky, who rides a tall bike and a unicycle -- not at the same time. I guess that semester of ASL wasn't wasted knowledge after all. She will also be at the NIght Bike Ride, yay! It was a good time for the most part though we did have a crotchety older couple who bickered a lot, that was less fun.

In any case, things are super busy but I'm managing to keep real life buoyant in the mean time. Just got to make it to the end!
Posted by Hannah Stitzlein at 9:38 PM No comments: