As some of you know, I am heading into my first week of my last (senior) year as an undergraduate. I just finished my first week back and boy am I intimidated by the work load! I probably won't be doing too many blog posts in the upcoming 4 months but I will try where I can, especially with artwork. We'll see what unfolds. This semester I will be taking:

1. Professional Practices - a senior class that will help me articulate my proposal for my thesis which I will be presenting in April (proposal, not thesis -- thats in the fall)
2. Advanced Sculpture - I've been dying to take this class. It is completely devoid of directed assignments and I will be doing my thesis work here.
3. City as Site - This is an art history class focusing on public artwork, I don't know a whole lot because this is a monday class and MLK Jr. day makes us the first monday class, I'll know more this upcoming monday.
4. Homeland - This is a Theory and Practice class which incorporates both reading, writing and studio assignments this one in particular focuses on the American landscape, environment and place.
5. The Wire as American Noir - A literature class in which we are going to be watching all five seasons by the end of the semester in addition to reading several other books. Luckily one of these books is No Country for Old Men which I just recently read so I have a leg up on it there.

if you're counting that is a full load and if I provided a syllabus for each one, well, let's just say I hope you're all praying! Only two semesters left (including this one) and I want to finish strong. This has been a long long journey in the making between the three colleges I've attended and countless major changes I've made. Let's just hope I get to the end alive. :0)
Posted by Hannah Stitzlein at 11:50 PM 1 comment: Links to this post

Last night I was awoken to the deathly screams of our chickens. And then I woke Joel when I heard more frightened squacking. Something was wrong and I feared a raccoon had gotten one of our chickens. I grabbed a flashlight and handed it to Joel and he shined it out the window to see the ringed tail of a raccoon climbing up the fence. My heart was racing as we put on appropriate clothes to go outside into the howling wind. As we opened the gate to the backyard we saw the raccoon slinking near the compost pile and then up the fence again. We checked the coop and saw only four chickens. The Delaware White was missing but her feathers were everywhere. We looked behind the garage and under the coop then searched the yard. We finally found her behind the compost pile where she lay dead.

I kept hearing the skittering of leaves on the concrete behind us and I was afraid a rabid raccoon was behind us, but it was only my nerves getting the best of me. Joel put the Delaware in a bag and I shined a light on where the raccoon was hiding so that we weren't caught unaware if the raccoon tried any funny stuff (i.e., rabidly jumping out of the tree and attacking us). We closed up the other chickens and irreverently put the Delaware's body bag in the trash can putting a weight on the top so the raccoon couldn't carry her away.

We waited up for about another hour while we settled down and listened to see if the raccoon would open the coop somehow. The worst part was that this was our fault. We didn't close the coop. I thought about it after I put on my pajamas before bed and thought, "They'll be fine, we forget to close it sometime and we haven't had a problem yet." Those were my thoughts. "Yet" isn't good enough and we paid for it. RIP Delaware White. 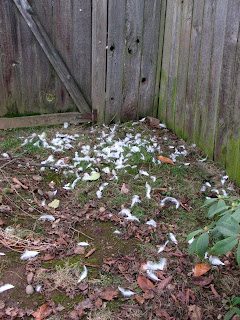 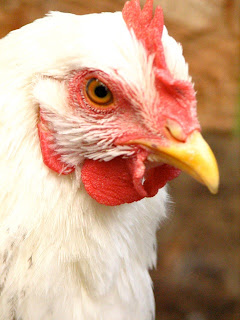 She is survived by her sister chickens. 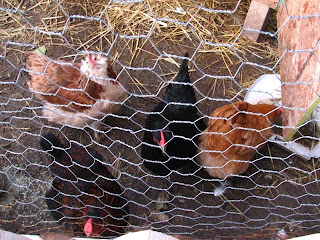 Posted by Hannah Stitzlein at 12:43 PM 3 comments: Links to this post

As some of you may have heard, a couple days before the new year we got a fair dumping of snow on Portland. It was beautiful because it fell so rapidly that it didn't have time to melt until it was done. And then just as quickly as it came, it melted away. But we won't dwell on the latter but the former, where it actually looked lovely.

This is our neighbors house after a two hours. 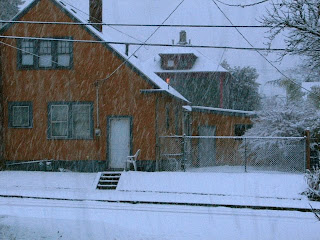 Our chickens were very weirded out about the snow and huddled into a corner of their pen. 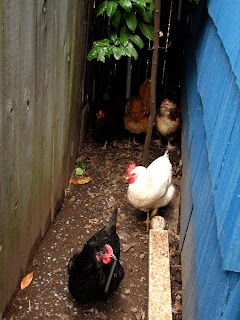 My chicken ventured out into the snow, I think because I'm usually the bringer of food. This time I just wanted to take pictures. This is less than an hour into it. 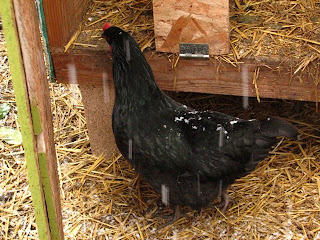 This is about two hours after it started. You can tell just how pink the fence is. 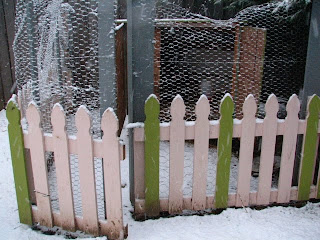 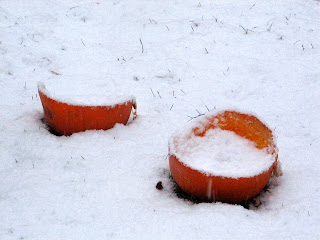 By this time the chickens had all gotten back into the coop. They usually only go in at dusk, they don't even mind rain, snow however is a different matter, "The sky is falling!" 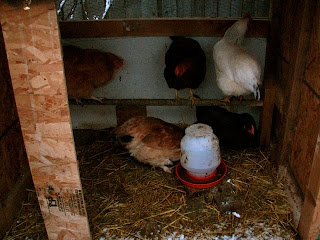 The next day they stayed in the coop until I made tracks in the snow where they could peck at the ground. 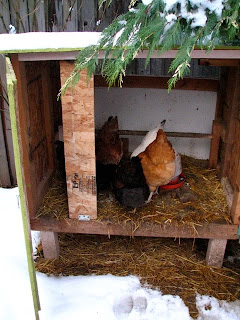 I think these tracks belong to a robin, who was not a big wiener about the snow. 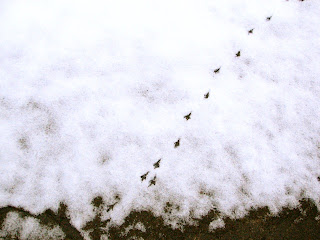 Joel had to walk home because it was too slick to ride. Luckily fresh snow is pure joy, so it didn't bother him. The only people we saw biking were folks who have massive bike tires. I tried to take a picture of one guy but it didn't come out in the photo. 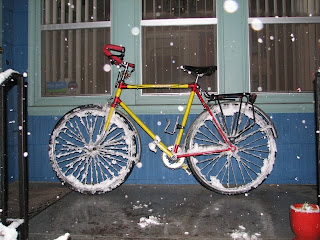 And as of late we've been having some odd eggs. This one happens to be flat on one side. 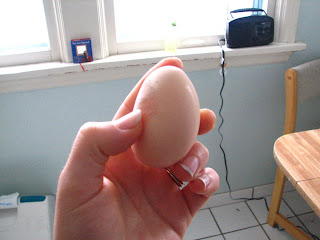 This one happens to have no shell... I think we have a new layer and not all her equipment is up to speed yet. I can't wait til we have all five laying! 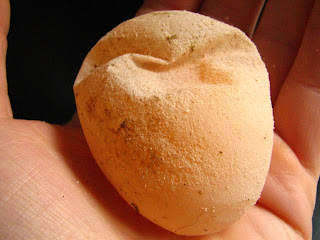 In other animal news, Orson has been particularly snuggly with me and Joel and its been a lot of fun to have him hang out with us. He's generally a very independent cat and not all that cuddly. The whole reason we got him was that he's a mouser and we had a mouse/rat problem which he efficiently dealt with (thanks pal!). Here's how it works. Orson gets snuggled up to Joel while Joel is reading a magazine. Then Orson gets moved and sits on the magazine, then Joel pulls said magazine from under Orson and uses the cat as a magazine stand. 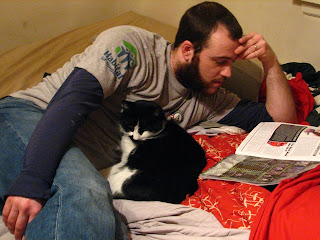 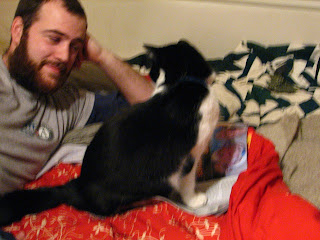 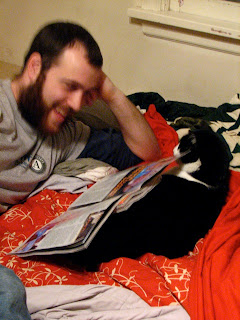 A couple days ago Joel had the day off so I taught him how to use my sewing machine. He converted a too-short Woodcrafter's athletic jacket (with the quilted insides) into a pillow. He did a really good job and learned quickly. 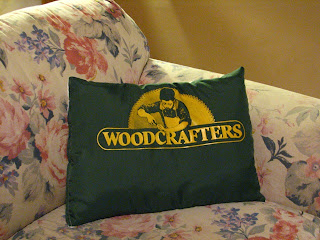 That night Clara made dinner for all of us, Huevos Ranchero! It was very delicious and we got to use the eggs from our lady chickens. 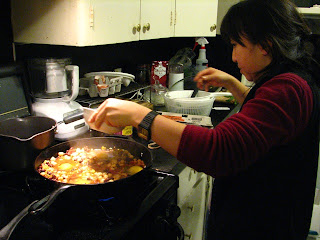 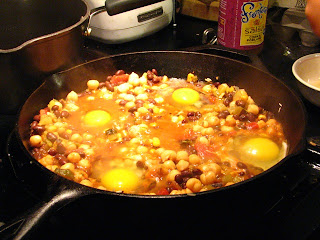 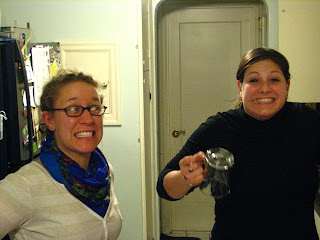 And lastly, I've been having fun putting together music packages for my friends across the country. I've been illustrating the covers for the CDs and have had a blast. 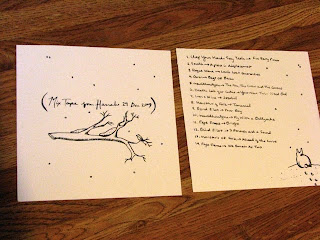 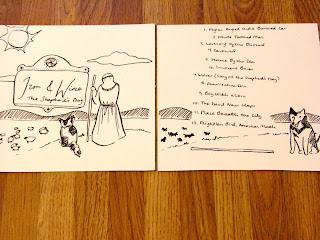 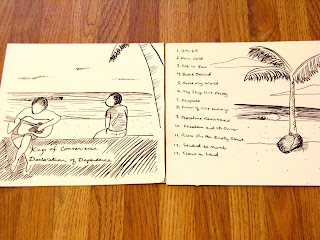 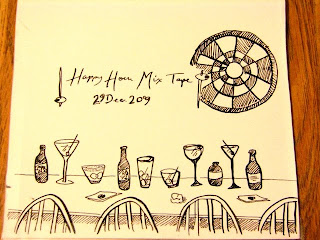 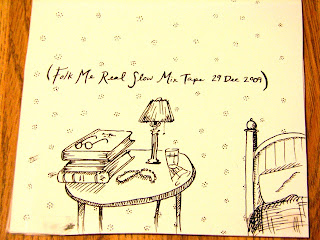 And that's about all for now. Its been a fairly quiet new year for us in general but its been nice.
Posted by Hannah Stitzlein at 3:45 PM 2 comments: Links to this post