Joel and I have been working on this new diet and it really isn't a big difference from what we were eating before. The major difference is that we've been cooking more because we can't fall back on grocery store conveniences like frozen pizza, fries, or the ever so easy tuna melt on sourdough bread (yum!). We got really use to this kind of eating while I was working on my thesis when neither of us wanted to cook after a hard days work. But now that I've been working primarily in the day, with no homework in the evenings, I've been cooking more and Joel has been cooking more too.

Breakfast is usually not that involved except on our days off when they look a little more like this. 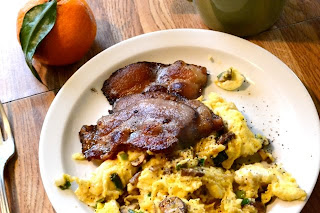 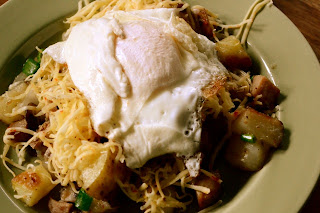 Lunch is generally a salad or left overs and generally not remarkable enough to photograph.

Dinner has been delicious and full of creativity. Sometimes it's pretty simple. Like this tandoori rubbed salmon with dilly baked green beans and carrots. 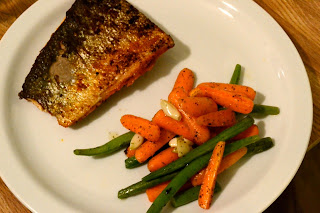 For family dinner tonight I made spice-boiled shrimp with brown rice and tat-soi (like broccoli), the brown stuff on top is oyster sauce which is kind of like Chinese ketchup. 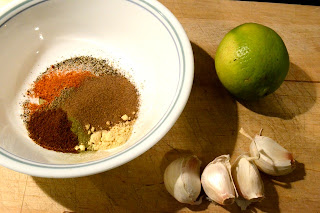 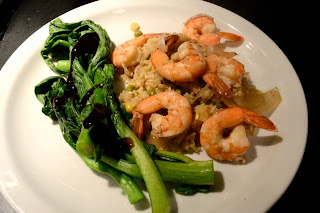 I find myself often relying on Chinese cooking -- traditional, not American restaurant stuff that is heavy on corn syrup and corn starch -- that is full of natural fats, and are vitamin rich like colourful vegetables. It's also a little challenging trying to keep to eating local and eating this way. I imagine I'll have a lot of this figured out in the next five years that includes both eating local and eating well (veggies and meat), maybe having my own farm is the easiest solution? Maybe. For now I'm just trying to find out what it means to "eat well." This includes quality, quantity and what is healthy.

We've both been losing weight; Joel has been weighing himself and I haven't been but I know I have been. When you are this little, it seems like losing an ounce is remarkable enough to be noticed. At any rate, both of us are feeling good so far. It is a little hard to restrain ourselves from eating dessert but we've been figuring out good substitutes (like a satsuma orange, oh how I love satsumas!) and also keeping portion control in mind. This is a really hard one cause I can easily put away a whole Chipotle burrito or any number of other big meals, I just love to the tastes!

Joel cooked a delicious chili the other night which wasn't altered at all for this diet -- no need! And for breakfast yesterday on our day off I made buckwheat pancakes and bacon. The pancakes were kind of a splurge but still gluten-free. Breakfast is usually not so extravagant, regularly consisting of an egg or two and some bacon or sausage. I try to spice up my eggs a little with cheese, mushrooms and/or green onions. So really it isn't a big leap from what we were eating before. Our fallbacks have turned into cheeseburgers with lettuce instead of buns, or sausages with carrots, instead of tuna melts. I have been enjoying figuring out the puzzle of what to have for dinner.

In other news, my store opens as Panera Cares officially on Sunday. We'll be the third Panera Cares associated with Panera. I only say associated because we're not actually connected with Panera Bread anymore. We're completely sustained by the community which means to say that if we can't make it Panera Bread isn't going to save our asses. Not that this will actually happen. It has been received well in the previous two stores that were converted into Panera Cares. I think after they convert our store they will kind of take a step back to see how things go. They don't have any more conversions planned but would like to eventually expand to more of the big cities. I'm glad I get to participate in this at the beginning. I know it will be really difficult and not everyone is excited about non-profits but it will be good regardless. I am looking forward to this.
Posted by Hannah Stitzlein at 10:19 PM