Yesterday was Joel's birthday and we celebrated in style. He invited a bunch of our friends to go roller skating at Oaks Park Roller Rink which has been around for over one hundred years, wow! Certainly we were some of the oldest kids there but it was a lot of fun. I don't remember the last time I'd skated on roller skates. On sundays (which yesterday was) they have a live organist who plays for four hours. It was an experience I've never had before. My childhood skating experience was dominated by roller blades and top 40 pop hits at the roller rink, which if I remember correctly was called Roller Town. I forgot to bring my camera which was a shame, so no photos of our skating finery. Then we went to the County Cork which is an Irish pub close to our house. After dinner we came back to our house and played cards, it was a great day!

Our food endeavors are not always recorded but here are some of the things I've managed to capture.

Egg "muffins" with sausage, bell peppers and cheese with a side of bananas in yogurt. 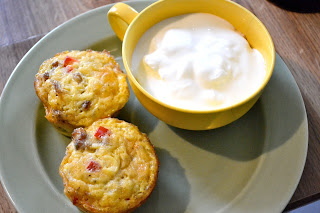 Duck legs with All Blue potatoes, sweet potatoes and onions. 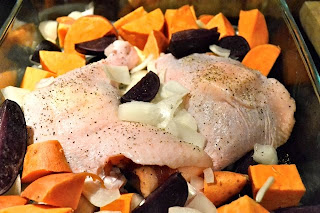 Buckwheat pancakes with blueberry puree with yogurt and a half sausage. 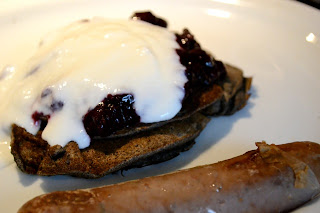 Mexican salad which I use to make often in college, this time omitting the rice and adding our co-op ground beef. Back then I was a vegetarian so it's something familiar yet different. 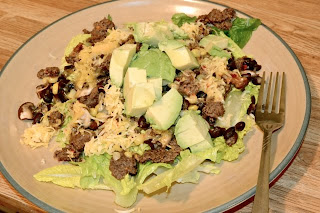 And this is the most fun I've had in a long time: a young Thai coconut. The outside is a hard husk that covers what you're used to seeing in the grocery, the brown hard coconut. The inside was encased in soft coconut meat which held the coconut water. We had to look up how to open the coconut and it was surprisingly easy. After opening it I got a straw and drank the coconut water, then scraped out all the meat. A lot of fun to eat! 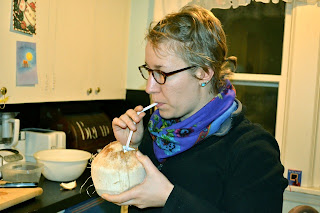 I have also been drinking coffee for breakfast on occasion with a couple dollops of whipped cream (did it myself so there is no sugar in it, just the cream) and it ends up just like a capucchino, such a treat! Yum!

In other news, I've been really busy with work. All through the last two years, even though I had been busy it had predominantly been me sitting and reading, studying or creating, not a lot of walking and standing -- which is what my job mostly entails. The switch over to Panera Cares has been interesting and yesterday marked the beginning of our second week. I'll include a video here that was shot last monday at our store, and yes, I'm in the background! It also gives you a good idea of how our store works.

With that being said, I've been very tired and not terribly motivated to do much in the way of artwork. I've been knitting but even that has slowed down remarkably. However, I did a little test of my graphic illustration skills and I'm rather pleased with the result! 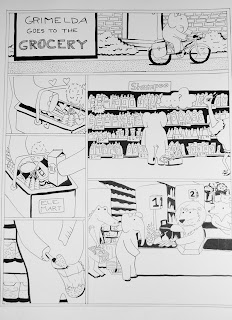 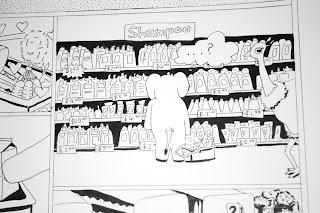 I'm still learning how to use the black-out pen and setting up the page but I am really happy with the first trial run. Hopefully we'll be seeing more of this in the future. And next time I'll actually scan it in instead of photographing it so the lines are clearer.

And this is the reason I didn't scan it in. 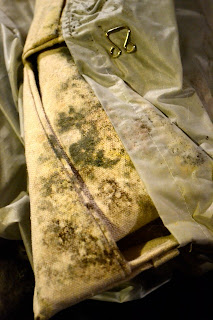 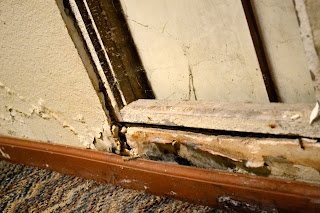 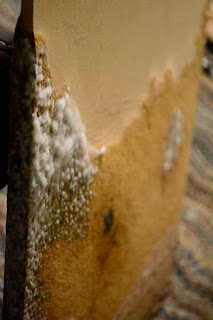 MMMMOOOOOOOLLLLLLLDDDDDDD!!!! Curses! In my studio! I had to throw out some of my work because it was so covered in mold. I had an area that I was keeping all my finished pieces which happened to be right next to the wall that has been water damaged and is now breeding mold colonies. I emailed the landlord to see what ought to be done. It would be one thing if it was just mold but now there is the addition of water damage and I'm not sure where it came from. Outside crack in the wall? Maybe I spilled a jar of water a year ago? The downspout is attached so I'm stumped.

I was cleaning, organizing and rearranging my studio and 75% complete when I discovered this awful scene. Scanning my illustration was right on the list after organizing and vacuuming the floor of my studio. I suppose it would be easy enough to bring my scanner upstairs. It is just all very frustrating.
Posted by Hannah Stitzlein at 6:11 PM