Life has been more or less filled up with school and things related to school, just as I had anticipated. Now that I have a 5-page paper and presentation out of the way I'm not going to be as busy as I was the first week and a half of school. And now I have a little bit of time to write a blog post before I start at homework again.

The first business of note that will more than likely shock the pants off of a couple of you: I dreaded my hair. 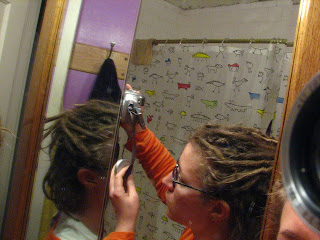 I started it on December 29, 2009 and now this is how it looks. For those of you who don't know, I had dreads a couple of times while I was at MICA but it was never very good and the way that they would loosen up just drove me crazy and by that time I would end up just cutting off my hair (if you're on facebook, I have a couple of shaved head pictures in there...). Anyways, this time I employed all my felting know-how and have kept up with them so that they don't get loose. Because they're in such an early stage they're not completely "locked" yet. I don't know how long that process will take but trying to do it right this time and so far, I'm feeling pretty good about them.

Yesterday in Portland we experienced a rarity: sunshine and warmth! Its not fair to say that that is completely true, however, its a rarity for winter to have a warm sunny day. So I took the opportunity to work outside on homework and soak up the sunshine as thoroughly as possible. Today of course is grey again but I won't dwell on that too much. 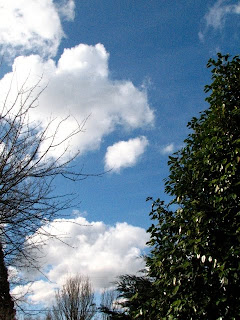 So I ate lunch outside which was delightful. The bottle in the picture is of some homemade kombucha, we finally got a kombucha baby to make more again (our last one died in the summer time last year when it got too hot). 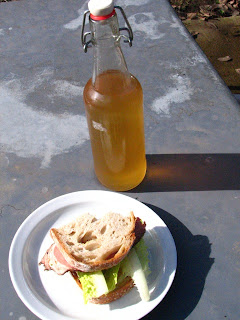 And while I was working this little guy said hello for a couple minutes. 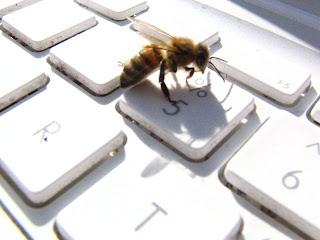 I also snapped up a couple shots of the chickens hanging out. Here they are dust bathing. They were really funny, all lined up in a line along the garage. 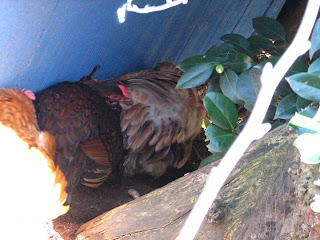 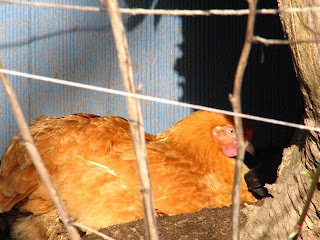 I also found this bitty egg in the middle of our yard. I'm pretty sure it doesn't belong to our chickens because it was so darn small and when I cracked it open I'm pretty sure the yolk was in transition to becoming a recognizable embryo. But it matches the colors of eggs our chickens lay and because it was so small it would make sense that it was in a weird spot because the chicken didn't realize it was an egg coming out and not a poop (which happen to be slightly larger than this egg). Imagine if you will the egg being the size of your index finger curled over and touching your inside thumb joint crease. That's how little it was. 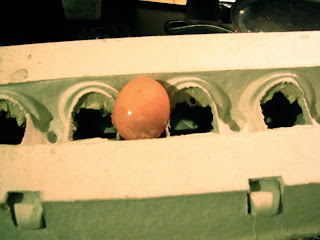 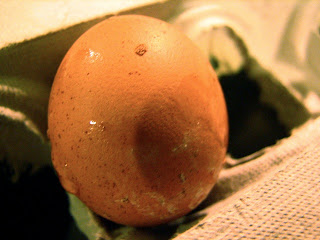 And here is the only thing growing in our yard at the moment. I'm a little nervous that its so warm right now and how big they are because if it gets really cold again (below freezing) I'm afraid we're not going to have any onions or garlic. I don't know if they'd be able to withstand that much cold. In other news, some garlic that I planted last year never came up but this year, they are! These are the fellas I planted this season. 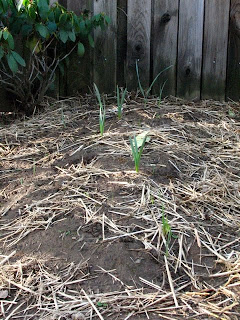 In other news, Orson is still being super cuddly. 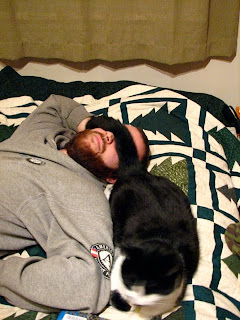 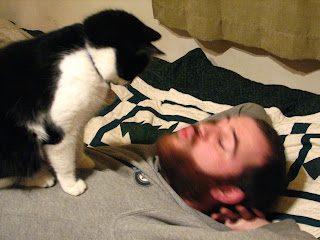 And some remaining Christmas things. With some of Joel's Christmas money he got these patches (places he's lived) for his bike bag. 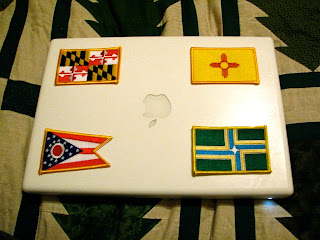 And I made Clara this sheep for Christmas. 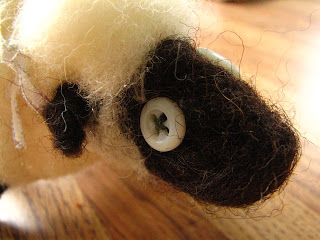 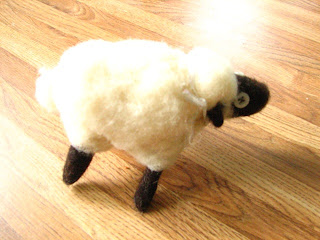 That's about all. Not a whole lot to report or show. Last night Clara, Joel and I made dinner together and it was really fun. We made egg rolls, black bean and garlic beef and fried rice. It was the equivalent of getting Chinese "take-out" except there was no high fructose corn syrup or msg. And it was way more fun to cook together than to wait around until the food gets there. Cooking together is one of the most fun things to do when everyone works together and it comes out well. :0)
Posted by Hannah Stitzlein at 10:57 AM

looks like you guys are having tons of fun! dinner sounded good and I'm glad you guys get a chance to spend time together even when everyone is so busy. Love you all!