A couple days ago I was practically bed ridden because I was so sick. I had spent the morning expelling everything in my bowels and was left with no energy and a very uncomfortable body/stomach the rest of the day. Orson kept me in good company however. Joel was good enough to snap up some happier moments in my day. 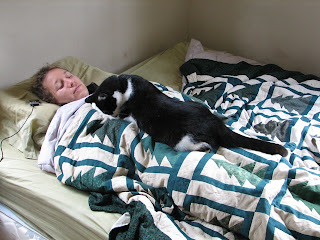 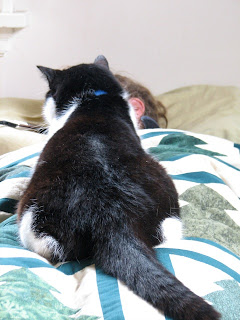 Luckily that only last a little over 24 hours and I feel completely better now. I've been sick so much this year that having a 24 hour bug was a piece of cake. I still don't know why I keep getting sick and perhaps going to the doctor would be a helpful thing. Oh well.

Today, after several months of being overdue: I racked our wine! It was a process full of trial and error but luckily I did it while all the fellows were at work so I was able to make as big of a mess as I wanted and error all I wanted. It was messy to say the least.

We started these wines last summer and today I decided I wanted to be productive and finish that part that has been hanging in the back of my mind for several months. Every time I would look over and see the corner table full of wine jugs I would think how we need to rack them but it sounded time consuming and like a big endeavor. And it kind of was. I ended up needing to mop up the floor after I was done but no one ever complains when that happens.

Here are the empty jugs! Each one contains about the amount of liquid as fills four wine bottles. Which was nice to figure out. 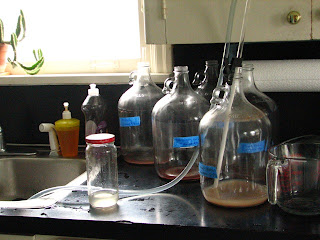 I didn't get many in process photos because it was so wet everywhere and I didn't want to mess up my camera. So here are most of the bottles corked (racked) ready to head down to the basement. The red thing in the corner is the bottle corker. It grabs the neck of the bottle and pushes the cork down into the neck. I'm clearly not proficient in using it yet, and/or we bought too big of corks. While they aren't perfect I think it does the trick. We're going to try to do more wine this year (dandelion, salmonberry, elderberry, thimbleberry, more blackberry -- PNW native wines!). 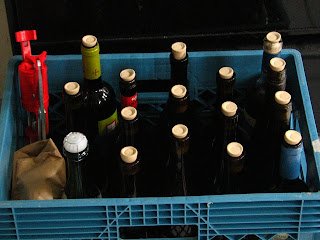 Then I put them in our fantastic basement cellar/closet. Some of the shelves have black walnuts that are drying on them from last fall. We babied those walnuts far more than we really needed to. Maybe I'll tackle cracking those tomorrow. 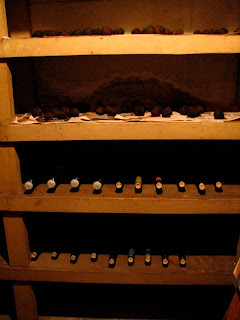 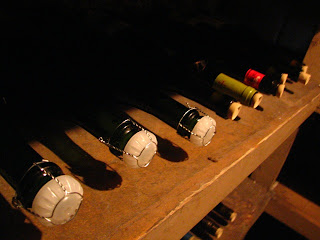 The three bottles closest to the camera (bottom left) are ginger-lemon champagne. That is a shorter process than wine even though we treated it like wine. Altogether we bottled four ginger-lemon champagnes, 4 peach, 4 blackberry-rosehip, 4 raspberry and 3 plum-cherry wines. (19 bottles of fermented alcohol altogether). They're still not quite finished so I'll reserve the naming of flavors and bodies until I've tasted the finished product. The blackberry-rosehips are the most interesting of the wines, far more complex than the rest of fruit wines. And the champagne tastes like an English garden. Maybe I'll reserve the fluffy abstract descriptions for later.

Also, while I was down in the basement I photographed my studio space which I cleaned up the other day. I disassembled a half finished piece which I intend to put together again later this summer. This piece was taking up lots of space and just making everything look like junk. So I cleaned it up a bit. 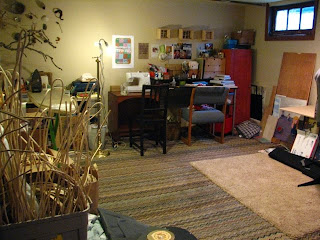 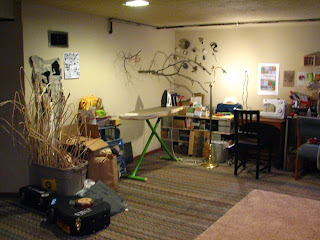 Now onto our garden! The onions and garlic and doing wonderfully. I'm just about the "behead" the garlic of their flower shoots (also known as "scapes" in the gourmet food world). I won't be doing this to the onions though because they are specifically topsetting onions which means they put out onion seeds at the top that are actually little bulbs which you can save and replant the following season. 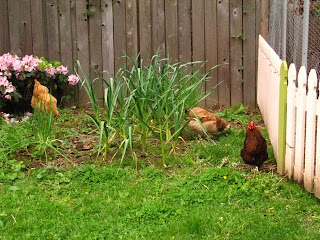 I was finally able to plant all the seeds I'd been wanting to plant -- lots of long germinating fall harvest plants and lots of summer delectables (sweet winter squash, corn, sun flowers, transplanted tomatoes, beans, peas, broccoli, beets, brussels sprouts). We'll see how well they germinate. The weather has been very cool recently and I'm afraid that direct seeding them was perhaps not a smart idea in Oregon. Dumb. 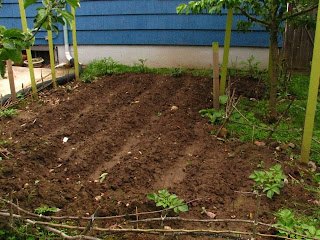 I also planted a patch of space in the front yard that we prepared in the fall. People often times walk by and look perplexedly at our patch since it it in the middle of the grass. I'll admit its a funky patch but hopefully it'll look more normal when there are full bushy plants in there this summer. I'll take pictures when its filled out a little more.

Our apple tree is also doing remarkably well. I thinned the apples as much as I possibly could, the taller branches can be for the birds if they want. Its so full of bouncy ball sized fruits that are getting bigger and bigger by the day! 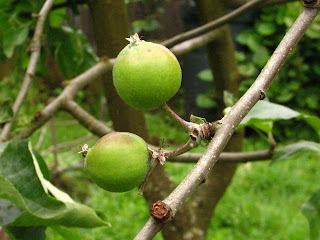 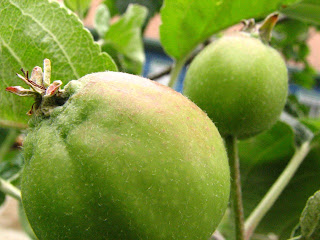 I can hardly wait for the day when they all get big and delicious. I hope they stay on the tree this year. We have been more actively caring for the tree this year because they do so much better when people actually pay attention to them. Cool. :0) I can't say that our Italian plum is doing nearly as well. I've counted just a scant few. We won't be rolling in plums this year which is a shame. They were so delicious and tart. I suppose you can't have everything.

At any rate, we have some good garden guards that have just been born. They are tiny yellow things right now but later in the summer they will rule the garden and cover much of the space in their webs. We have a really great garden and I'll be the first to say its because of these guys, the lady bugs, the chickens and our cat. They all catch the pests really well and efficiently. It makes me happy that I don't even need to use *organic* pesticides or deterrents, I have free pest control! 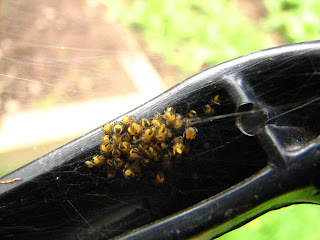 Posted by Hannah Stitzlein at 11:36 PM

I'm sorry to hear you've been sick so much! What a bummer! But those wines look great! You are such an inspiration to me! What book(s) did you use for wine making? The pickling books you suggested to me before? I'm not growing any of my own fruit this year, but lots and lots of herbs, plus CSA. I'm thinking wine and preserves galore!

Jen, we used Wil Fermentation by Sandor Ellix Katz for the wine (and ginger beer, and champagne -- this is an amazing book!) and the preserving books are by Linda Ziedrich "The Joy of Pickling" and "The Joy of Jams, Jellies and Preserves" both are really great if you want to get into preserving. Which I highly recommend.